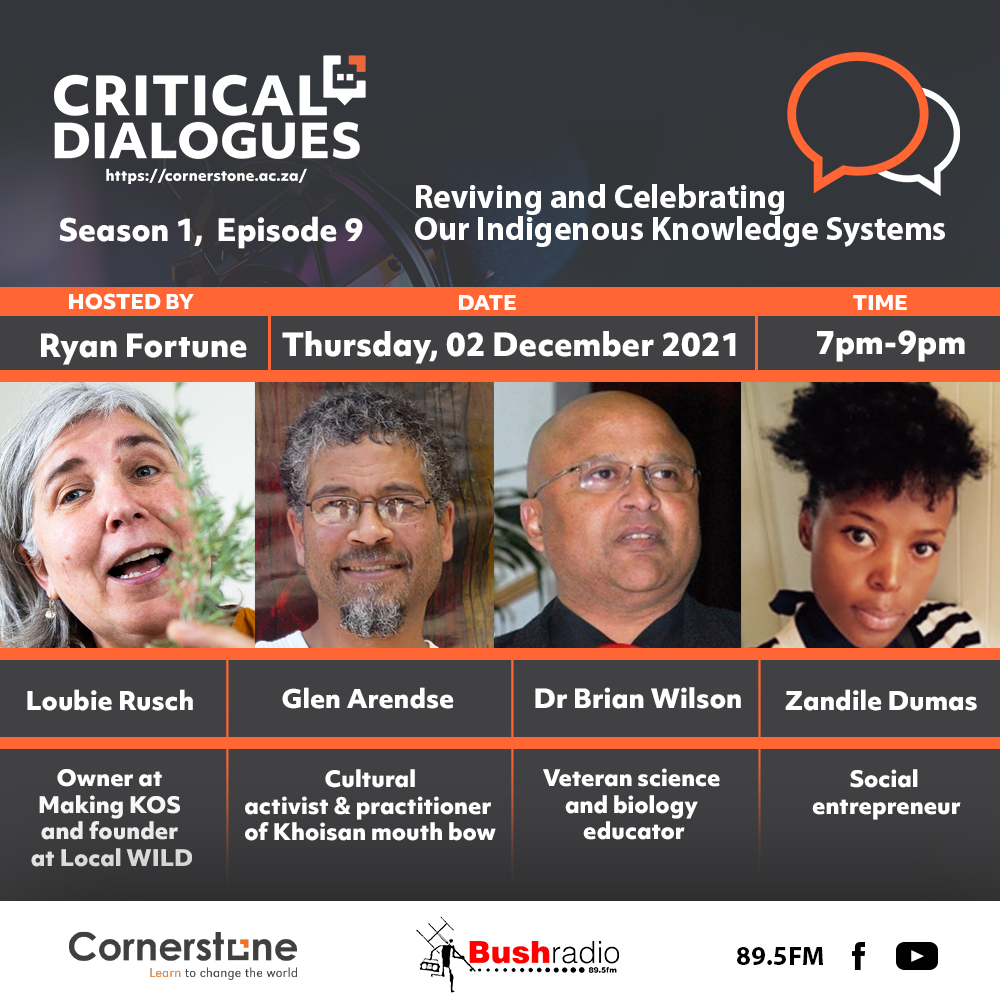 APPLICATIONS & REGISTRATIONS FOR 2022 ARE NOW OPEN.

Register for this Event

Join us on Livestream

On 1 December 1838, slaves were emancipated at the Cape Colony in South Africa.

Some 39 000 slaves were freed from the system of ‘apprenticeship’.

While slaves were brought into the country by the Dutch from other colonies around the world, the slave system impacted the Khoisan peoples of Southern Africa most harshly.

Commandos of colonists would conduct raids against San peoples — often on the pretext that the San were simply stock thieves — for the purposes of acquiring slaves.

In such cases, San men were often killed and the women and children taken into bondage, to serve as labour on colonial farms.

The treatment of slaves in South Africa was often brutal, with psychological, physical and sexual abuse commonplace.

This 9th episode of the Cornerstone Critical Dialogues will not only look at this painful history, but also examine various local efforts to elevate and celebrate the indigenous cultures destroyed by slavery at the Cape.

Our guests are all esteemed cultural activists, historians and archivists, always working to keep our memories of the past alive, in order to better equip us for the future.

There’s Loubie Rusch, owner at Making KOS and founder at Local WILD, who has spent the past decade working to re-awaken public interest in edible indigenous plants; Glen Arendse,  longtime cultural activist and practitioner of the Khoisan mouth bow; Dr Brian  Wilson, a veteran science and biology educator with a passion for inspiring young people, and Zandile  Dumas, a social entrepreneur who wants to see indigenous knowledge being taught at schools. 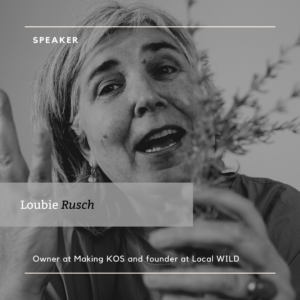 Owner at Making KOS and founder at Local WILD

Loubie Rusch is an experienced Landscape Designer who  encouraged her clients to plant indigenous landscapes suited to their environment. In the past few years, she has included exploring indigenous foods and encouraging South Africans to get to know, grow and use indigenous food plants in a contemporary way, both in the garden and the kitchen.

Loubie has been exploring indigenous foods from the Western Cape’s edible landscapes for over a decade. Indigenous foods sustained local people through foraging but are no longer in use. She is actively pursuing ways to grow indigenous food plants so they will no longer be a prerequisite to using indigenous ingredients. She also focused on developing local livelihoods within communities that might still hold local food knowledge.

Loubie began cooking and bottling under the brand name Making KOS but soon expanded into pilot cultivation projects to explore scalable, sustainable and regenerative access to local indigenous ingredients. She collaborates on a range of research, community and market access initiatives to see our locally adapted indigenous foods reintegrated into food traditions and local economies. She has witnessed how such collaborations contribute to recalibrating our embedded social, economic and ecological imbalances.

Loubie recently published Cape Wild Foods: A Grower’s Guide, aimed at home gardeners and small farmers. She is busy with its sequel, The Cook’s Guide, and a nutrition study that all cover the same selection of 22 plants.

Her books are a way to extend the message beyond what she currently achieves through her Facebook page, Making KOS, and the talks and courses she offers. Loubie sells her small runs of bottled produce at the various talks, wild food walks, and occasional dinners she offers or is involved, she believes that in providing a taste of what is possible with indigenous foods she can empower others to start experimenting as well. 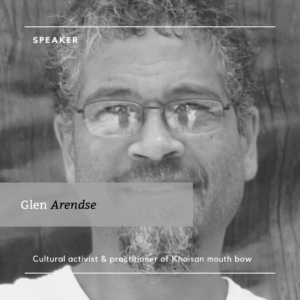 Cultural activist and practitioner of the Khoisan mouth bow

Born from a musical family in the northern suburbs township of Matroosfontein, Cape Town, his interest in sound and music started at an early age with self-taught explorations on various instruments. He started drumming in a township youth band and was later a founding member of his highschool band at Spes Bona; he went on to play percussion with various local jazz groups, including the UWC Jazz Band, N2, Cape Velvet and with alternative and traditional indigenous music explorers.

Since 1999, as a founding member – along with Jethro Louw and Garth Erasmus of the Khoi Khonnexion performance poetry initiative – his work has incorporated traditional Khoikhoi instruments. He has also accompanied various poets on stage and in productions, including Khadija Heeger, Antjie Krog, Mputhlane Bofelo, Nama Xam, Neil DikweX Carelse, Mikey Wentworth, Winslow Schalkwyk and Vanessa Lipari.

In 2019, Khoi Khonnexion collaborated with an international theatre ensemble to co-produce and perform a musical, House of Falling Bones, that world premièred at the Kampnagel International Festival in Hamburg. In 2020, he led the Cape Town Carnival theme float, ‘Incredible Journey’, which subsequently went online via zoom. He also presented on the   hunting bow at the opening session of the Cape Town carnival development workshop series. He is a founder member of the Cape Cultural Collective and one of the poets featured in its poetry publication, At Truth’s Edge.

He recently collaborated on mouthbow in a traditional music concert with cultural icon Madosini. He was also in concert with Tony Cedras, and in two ‘Bow Conversations’ with Hilton Schilder and Bien Petersen respectively – continuing to bring traditional mouthbow music and craft to public performance and popular imagination.

Just checking the use of this word: is it self-applied? Change to Khoisan? 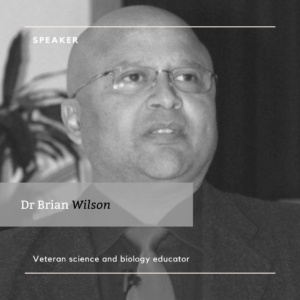 Dr Brian Wilson is a veteran science and biology educator who is focused on providing quality education for learners. Dr Wilson earned his PhD from the University of the Western Cape in 1994. He has worked as the Chief Education Specialist at the Western Cape Education Department (WCED) for over 20 years, managing curriculum advisers in various subjects and phases, directing curriculum design and development, training teachers and advisers and developing student assessments.

Dr Wilson also previously worked as a curriculum adviser for the Western Cape Education Department providing support to teachers in Biological and Life Sciences. He was the Head of the Sciences department at the Söhnge College of Education for over 10 years, where he taught and trained student teachers from first to the fourth year.

Dr Wilson represented the Western Cape Education Department at the 2007 World Congress on Civic Education in Buenos Aires and led a delegation to Xiamen University in Beijing in 2012. He has authored and co-authored many peer-reviewed zoology, physiology and education papers and abstracts in national and international publications.

He is the co-author of three high school textbooks published by Oxford University Press. 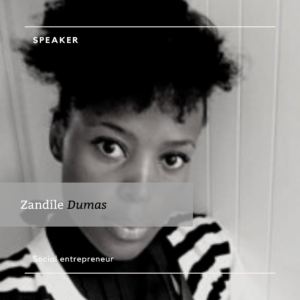 Zandile Dumas is the Founder of  Creative Dogma Consultants. She completed her Master’s in Social Entrepreneurship at Goldsmiths, University of London, in 2019 as a recipient of the prestigious Chevening Scholarship.

She is an experienced project manager, project specialist and social services specialist. After consulting in South Africa’s public sector for 10 years, she wanted to deepen her knowledge in the field of social innovation, which led her to complete the Master’s in Social Entrepreneurship, mindful of South Africa’s triple challenge: deepening inequality, increasing unemployment, and chronic poverty – as well as the concomitant psychological, physical, spiritual and emotional trauma.

Her MA gave her insight into systemic socio-economic challenges and encouraged her exploration of systemic and socially innovative solutions. This, in turn, activated her curiosity and subsequent advocacy for indigenous knowledge systems as a source of socially innovative, inclusive and sustainable development.

After completing her studies in London, she returned home enthusiastic about contributing to indigenous knowledge and systems-led development.

Following a referral from Professor Richard Hull, she was awarded a research grant from the University of Cape Town Graduate School of Business to explore the intersection between entrepreneurship and indigenous knowledge systems in townships as part of their Master’s in Inclusive Innovation programme.

Her vision is to contribute to the design of ecosystems that support the demand and supply of products and services from of indigenous knowledge systems and, thereby, to impact the country’s triple challenge of poverty, unemployment and inequality.