APPLICATIONS & REGISTRATIONS FOR 2022 ARE NOW OPEN

what's the point of activism against gbvf?

Since the outbreak of COVID-19, emerging data and reports from those on the front lines have shown that all types of violence against women and girls, particularly domestic violence, has intensified.

This is the growing ‘shadow pandemic’ – and we need a global collective effort to stop it. As COVID-19 cases continue to strain health services, essential services – such as domestic violence shelters and helplines – have reached capacity.

With the 20th anniversary of the International Day for the Elimination of Violence against Women on 25 November, we ask if any such campaigns really make a difference to the shocking prevalence of rape in our country.

To help unpack this question and more, host Ryan Fortune will be joined in the Bush Radio 89.5 FM studios by Joy Lange, Director of St Anne’s Homes, and Patric Solomons, Director of Molo Songololo, two people and organisations that have long been engaged in the fight against this scourge of South African life.

JOIN US FOR THE LIVESTREAM 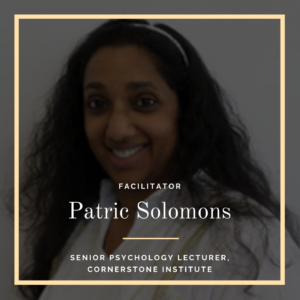 Narissa has worked as a clinical psychologist in a variety of settings over the past 20 years. This includes psychiatric hospitals, NGOs, private practice, community involvement and academic institutions.

Apart from being an experienced clinical supervisor, Narissa is passionate about training professionals and social justice. She is currently a Senior Psychology Lecturer at Cornerstone Institute.

Narissa has also worked as a facilitator and retreat guide. Her most recent certification is as a facilitator of life skills training and as a life coach through the Academy of Life Coaching. She is also a qualified Montessori directress. 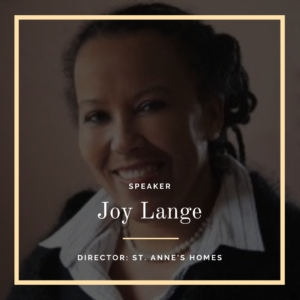 Joy Lange changed lanes from the corporate world to NGO work. Since 2009, she has served as the Executive Director of St Anne’s Homes, a short-term care facility for the abused, pregnant and homeless women, with their children.

Joy is fulfilling her life purpose of empowering women and children who are survivors of gender-based violence. She studied Child and Family Studies and is passionate about community upliftment and transformation.

Joy has spoken at various international conferences. The International Alliance for Women (TIAW) World of Difference Awards recognised Joy for her work at St Anne’s in support of women’s economic empowerment and advancement. TIAW recognises 100 women from around the world for their “actions, efforts and inspiration (that) truly do make a ‘World of Difference’ in supporting the advancement of women”.

As a mentor, Joy facilitated capacity-building workshops for various victim empowerment NGOs as well as a multi-sectoral engagement workshop – ‘Developing Referral Pathways’ – for victims of crime and violence in Oudtshoorn and surrounding areas. This was in partnership with the Provincial Department of Social Development.

Knowing that she is part of ensuring positive deposits into the future is what makes her persevere in the fight against GBV. In her free time, she enjoys outdoor adventures with her family. 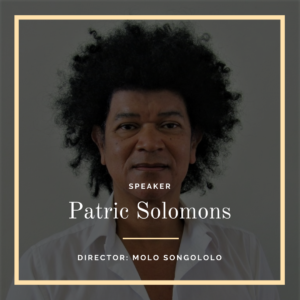 Patric Solomons is the Executive Director of Molo Songololo, an organisation that works to protect and defend children through awareness, education, training, advocacy and support. Patric is in charge of managing and developing the programmes at Molo Songolo. He has made significant contributions to the development of the child rights framework in South Africa through his work.

He has taken part in various initiatives, forums and platforms including: advocating for the establishment of a Commissioner for Children in the Western Cape; the South African Human Rights Commission’s Section 5 Committee on Children; facilitating the inclusion of children in national and provincial public decision-making processes; drafting of the National Child Participation Framework with the Department of Social Development (DSD) and Save The Children; and establishing Social Cohesion Advocates under the Department of Arts and Culture.

Patric has been instrumental in implementing various child law reform processes.  He was also part of the advocacy for, and participated in, the development of the 2010 FWC Child Protection Plan; pioneered the campaign against trafficking in children and child sexual exploitation in South Africa; established The Molo Show – a TV show aimed at improving SABC children’s programming; organised the Children’s Summit and supported child delegates from all over South Africa to draft the Charter on the Rights of Children in South Africa at the 1992 International Summit on the Rights of Children in South Africa.