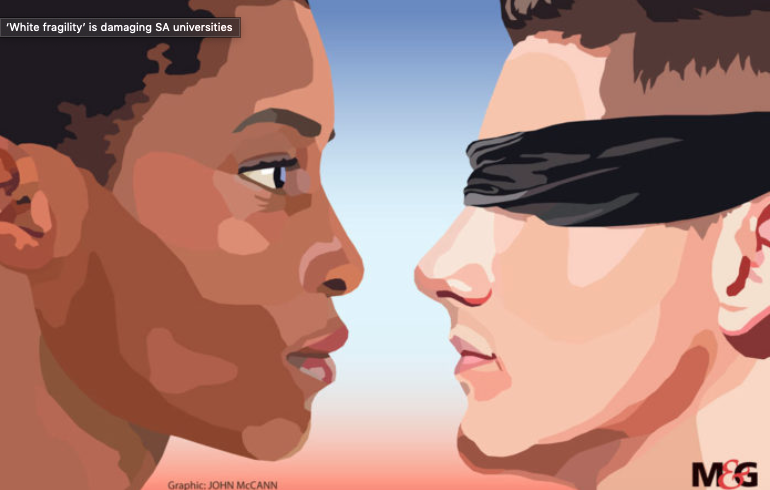 ‘Whiteness” is threatening transformation and the academic project at the country’s universities, a recent public meeting convened by the Cape Peninsula University of Technology (CPUT) and the University of the Western Cape (UWC) was told.

Singling out white liberals as the ones “doing the most daily harm to people of colour”, Robin DiAngelo, a white academic from the United States, said that much equity work was being stalled by white people who refused to acknowledge their own prejudices.

“I am all for equity teams, but some of the most gatekeeping [types of] white people are in this work,” she told the public discussion, which was co-hosted by CPUT’s Transformation, Diversity and Social Cohesion Unit.

The continuing prevalence of racism at universities was also undermining the respect due to black academics from the student cohort and their peers, according to Hein Gerwel, a researcher at Stellenbosch University.

Recounting an incident at a lecture that he was about to hold, when a white student told him to “just get away [from the front of the room], the lecturer is coming”, Gerwel made light of the prejudice that he has faced: “[When I am teaching], I tell people what to read — I don’t assume that you know more because of your melanin deficiency.”

Undermining by academics, who “continually question my ideas” also posed a problem, said Gerwel, although, he also noted that “we make too much of [individual] agency when considering racism”.

DiAngelo identified the problem as one of “white fragility”, which is the title of a best-selling self-help book that she wrote on the topic last year.

“White fragility is a kind of bullying,” she said. “We make you [black people] miserable if you talk to us about racism.

“Anti-blackness is a universal phenomenon,” she said, which is “not interrupted by smiling or good intentions – the idea that ‘nice people can’t be racist’. All white people internalise superiority.”

So, the challenge for white people is to “figure out how, not if, we have been shaped by these forces” and to acknowledge that their place on the “continuum [of racism] should be determined by people of colour”.

Nyx McLean, a lecturer and researcher at CPUT, recounted how a senior academic had queried an argument in their doctoral thesis indicating the complicity of white people in racism in general. The examiner’s query was accompanied by a note at the end of the report: “I am sure the student will put this down to me being a straight white woman.”

Structural racism rather than issues of personal relations posed the most significant challenge, said Gerwel, who identified a threat to the relevance of the academic project.

“A change in world view” was required, he said, noting the failure of the “scientific” approach to classical economics to take account of lived realities, particularly in the South African context in which “class and race is the same”.

Race was also seen as shaping how institutional spaces at universities were experienced. Even the meeting on white fragility itself, which was held at UWC, was viewed through this lens. One black audience member said: “This is a majority black space — I was crying here. But at the University of Cape Town, which is a white space, white people said nothing in the Q&A.”

The concern was tackled by Tumi Jonas-Mpofu, a post-graduate student at Stellenbosch University. “You can take two white people and that space can still be white [although the rest of those present are black]. Black people are supposed to assimilate to white people, but not the other way around,” she said.

McLean said: “Whiteness protects itself under the banner of the rainbow nation.”

White women and lesbian, gay, bisexual, transgender, asexual and queer (LGBTIAQ+) people came under particular scrutiny for their role in this. “White women use feminism as a way of not looking at their racism,” said DiAngelo.

McLean talked of how LGBTIAQ+ people also “protect themselves from challenging their own racism” and the meeting heard how the idea of “intersectionality”, which considers how different forms of prejudice interlink and amplify each other, had become politicised and used against black people.

The notion of assimilation was placed in the context of a history of violent oppression of black people, including through slavery and under colonialism and apartheid. “To say to black people, ‘Get over it’ is the cruellest thing imaginable,” said DiAngelo.

Gerwel reinforced the point from a political perspective: “Liberalism is ‘kak’. You cannot be a liberal in a society that is inherently unequal,” he said.

The obstructiveness of white gatekeeping liberals at universities was also placed in the context of the continuing isolation and denialism of white people in South African society. “Cradle to grave, most white people live in segregation with no sense of loss,” said DiAngelo.

Expanding the point, Gerwel said: “Cape Town residents are removed from the reality of the rest of Africa.”

But the meeting was also viewed as a sign of changing times by Edwin Cleophas, the managing director of the Social Justice Agency, who talked of “entering a new phase. Research has shown that we cannot maintain the status quo. Twenty-five years of talking is enough, now we are moving to action.”

One member of the audience called for violent retaliation as the best way of dealing with racism. In response, the moderator of the meeting, Asanda Ngoasheng, an independent political analyst and diversity expert, said: “We are not in South Africa unless we invoke violence. South Africa was built with violence. So, the question is: What kind of structural violence can we respond with when we are confronted with structural violence?”

For Ceophas, one response would be greater involvement by white South Africans on the issue. “I say ‘thank you’ to white people for showing up. He urged them to “speak up on public platforms, acknowledging ‘we are the problem’.”