Two wildfires, the Mountain and the Cape Flats, each with ruin in its wake

Two wildfires, one on the Mountain and another on the Flats. The one finally extinguished, the other still raging, each with severe ruin in its wake.

The blazes on Table Mountain were visible for kilometres.

While teams of firefighters fought the fire, among others, major parts of a historic campus library soon lay in ruin.

Soon, horror turned to reflection, with commentators considering not only this material loss, but also its symbolic meaning. 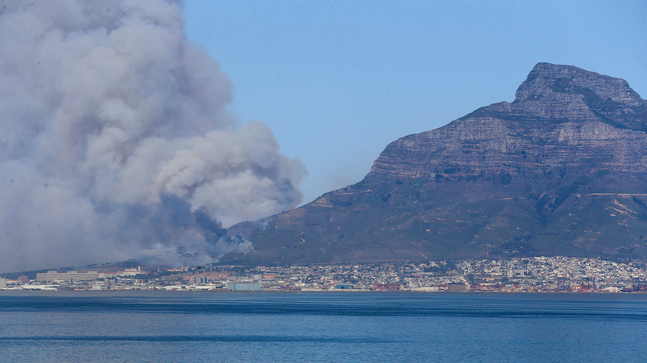 Firefighters battled to contain a blaze that has gutted part of the restaurant at Rhodes Memorial this morning. Picture: Leon Lestrade/African News Agency/ANA.

With some of the lost collection reportedly dating from the 1500s and a major collection relating to Africa, most decry the destruction as a loss of history, as much as a loss knowledge.

On some the reality is not lost that the devastation later must birth new collections that reflect the emerging histories of the continent.

Public discourse also turned to telling a story of heroes and villains.

We applaud the grit of firefighters and volunteering residents, and lobby groups blame the South African National Parks for the fire, for its patience with vagrants starting fires on the mountain, they claim.

As the story unfolds typical aspects emerge of a how society responds to public crises – at first, a slow awakening to the trauma as word of the episode spread; the action of citizens to end the horror; the disbelief and anger at the devastation; the need to assign blame and punish the perpetrator; the telling of stories of courage to counter the sense of vulnerability and depression; the efforts to make sense of and accept the loss; and the gradual return to designing solutions that offer hope.

This is a “cycle of public grief”, which, for the vivid incident and immediate threat of the fire on the mountain, plays out in quick succession in a short period of time.

However, arguably, the same quick sequence and brief timelines do not count for the cycle of public grief for the wildfire that engulfs the Cape Flats – the blaze of gang violence.

The intensity and devastation of the flames on the Mountain offer a very real image of the inferno on the Flats, death and fear that continues to consume and leave families and communities of the Flats in ruin.

News reports indicate that no less than 500 murders took place in the province in the first nine weeks of the year.

The victims of turf wars often are children.

In the past few weeks alone, among others, 4-year-old girl lost an eye, an 8-year-old boy injured, and a 14-year-old boy killed by stray bullets of gang shoot-outs.

And yet, a cycle of public grief does not seem to take hold for this fire, as it does for the wildfire on the Mountain. This is not to say that the blazing traumas have unequal value or claim to grief. It begs the question of what underlies what, on the surface of it, seems to be shifting intensities of grief when faced with public crises.

The different abilities and opportunities with which people from diverse communities enact their rights is one underlying dynamic to consider in this regard.

This refers to how ready a community is with skills and access to resources to broadcast their trauma.

Accordingly, public crises activate citizens to enact their rights – crises as the “mobilisation of rights”.

A missing cycle of grief to follow a social wildfire, then, may well be so due the absence of activated rights.