What do songs, lyrics and instruments from ancient indigenous cultures have in common with multimedia and the internet? Perhaps the latter is the most apt medium to present and preserve the former. Curator Aryan Kaganof’s first edition on the website herri is redolent with images, songs, videos, writing, artworks and poems that provide an in-depth, colourful and absorbing exploration of musician Mantombi Matotiyana and the release of her first album, Songs of Greeting, Healing and Heritage.

It’s the navigation of herri that makes it unique: it’s totally up to you. On its landing page, the site has a red dot to click on, and a couple of red arrows, but where you go from there depends entirely on what grabs your interest.

You may find yourself reading a text, then choose to do so accompanied by a music clip before watching a video that has appeared as you scroll down. Your senses are tantalised while your intellect is stimulated.

“The design team has been tremendously important in working together to forge a visual identity that is distinctive and immersive. Kudos to Tsepo Ntsukunyane, whose illustrations have formed the backbone of the first issue, and Andrea Rolfes, who worked tirelessly to find a visual language appropriate to the project’s ambitions,” said Kaganof. 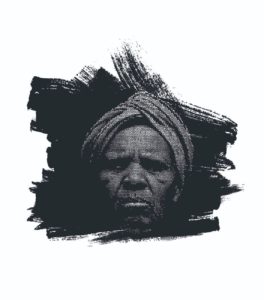 Tsepo Ntsukunyane’s illustrations (above and below) have formed the backbone of the first issue of herri. 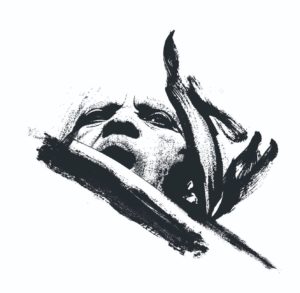 “herri is an attempt to answer the question, what does decolonisation look like in this age of hybridity? We discovered that there is not just one answer. herri is a soundmine of narratives, mythologies, ideologies, statements, ambiguities and ideas just waiting to be excavated. herri is merely one option among many. Discontinuity is the continuity. Disconnection is the connection. Incoherence is the coherence.”

The focus, he explained, is music, specifically music that is geographically South African: “But, for example, in the first issue there was a page on Moor Mother [Philadelphia-based poet/rapper Camae Ayewa], and in the second issue there will be a feature on Jlin [Jerrilynn Patton, from Gary, Indiana in the United States]. So we basically also look at artists who are doing really challenging, interesting and formally ground-breaking experiments in music, irrespective of whether they are from South Africa or not.”

Kaganof said the site’s name “is inspired by the first political prisoner to be jailed on Robben Island, Autshumato or Herri die Strandloper.

John Roberts – The People of Autshumao from African Noise Foundation on Vimeo.

The spelling of ‘Herri’ as opposed to ‘Herrie’ is a decolonial orthography decision — we do not believe that the Dutch spelling of the sound Herri is necessary, and, inspired by the way SMS messages have influenced the orthography of contemporary Afrikaaps, we have decided to use herri as a flag signalling a de-linking from conventional colonial spelling. Herri the freedom fighter is inspiring because he actually escaped from Robben Island.”

Patric Tariq Mellet’s thorough and intriguing biography of Autshumato, which appears in the first issue of herri, details how the image of this man has been distorted by differing historical accounts (in typical colonial fashion).

A huge amount of information about herri was written down, but the Dutch could not accept his intelligence and entrepreneurship any more than they could fathom the non-hierarchical systems that existed among the Khoi, and so he and his clan were cast in Dutch minds and their version of history as mere scavenging strandlopers.

“There’s one important thing about herri, something that, for me, was crucial in conceptualising what I wanted from the web-based medium,” said Kaganof. “You will notice that many of the articles have a dual language button top right. We designed the pages so that the articles that were available in more than one language would have these languages integrated, instead of a full-page article in English followed by a full-page article in isiXhosa or seSotho; rather paragraph by paragraph flip-flopping.

“Writers could choose by clicking on the button of the language they preferred to write in, which would make the text of the chosen language larger and brighter on the page, in this way avoiding the pitfall of linguistic apartheid, and rather foregrounding the act of linguistic code switching itself, which is much more like the actual practice of speaking in South Africa.

“Hopefully this will encourage people to explore the various languages available on the site, to actually look at paragraphs and sentences next to each other, opening up explorations of language as epistemic carriers, and also encouraging more writers to explore writing in their mother tongue [when it isn’t English].”

Each issue of herri has a theme. The first issue, for instance, is based on the vocalist, uhadi, isitorotoro and umrhubhe player [Mantombi] Matotiyana and, specifically, the recording of her album Songs of Greeting, Healing and Heritage. Issue 2 focuses on the Afrikaans reggae band, Country Conquerors.

“The theme invites writers to explore in detail the work of a South African music artist that we consider important. This kind of in-depth writing and analysis is sorely lacking in the contemporary media environment,” said Kaganof. 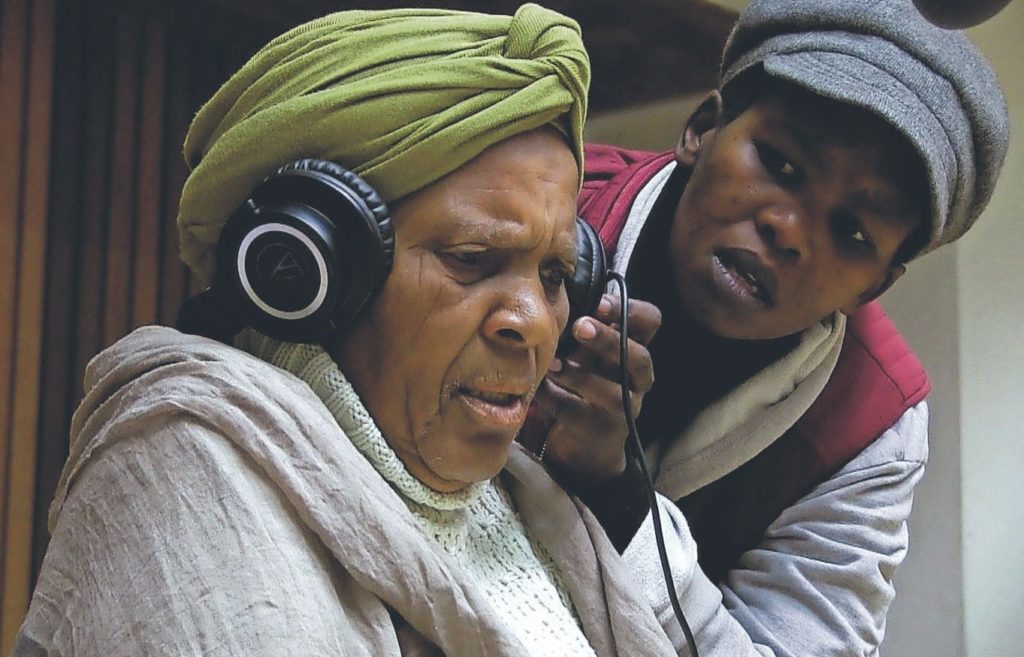 “Each issue of herri will invite writers to contribute to the various sections, gradually building into an intersectional archive of decolonial thinking, writing and doing.”

At the bottom of the site are sections with fabulous titles such as borborygmus, claque and ekaya, which fulfil different functions, such as archiving and tracking contemporary African music. A brilliant description of the club scene in South Africa in the 1990s, written by musician Warrick Sony and based on a documentary by Zandi Tisani called Rave & Resistance, is under the title claque. It details the country’s optimistic transition from the 1980s to the 1990s, both musically and politically.

Scrolling through these sections, one realises that herri embraces many divergent expositions beyond that of its main theme — Matotiyana’s album in herri01.

The issues of copyright and publishing, how the Songs of Greeting album was recorded — from the technicalities and equipment right down to what the artists ate between recordings — are noted in meticulous detail, written by various authors.

The themes of the album are those experienced by many black South Africans, such as how families were torn apart by the migrant worker system. Among others, Matotiyana highlights the importance of healing and just how painful it can be.

Rithuli Orleyn finely dissects the words Matotiyana chose for her lyrics, including the culture and context behind those choices. She explores, for instance, the ambiguity of the Xhosa word gona, used in the song WenuseGoli.

Here Matotiyana could be alluding to the fact that a woman left behind by her migrant worker husband may find that the relationship has grown cold and that she may wish to fill her loneliness by taking a lover.

The issue of how to examine music itself, outside of the box imposed by Western conventions, is raised by musician and composer Neo Muyanga. “We should start our conversation on the research of music that lives inside people, without following the example and stringent rules firmly created by colonists, or western ideology.”

Mbe Mbhele takes this further, reminding us that “… this [South African] society has married so much of its coercer that it has lost itself. It can no longer recognise its own physiognomy.

“The song Wachitheka Umzi Wendoda suggests, as a solution maybe, that we ought to stop this marriage to things and ways foreign. But then what follows: Do we divorce that which we have already married?”

Matotiyana was born in the Eastern Cape in 1933. She moved to Cape Town in 1984 and started a small business in Nyanga township, selling meat, homemade beer and bead necklaces. Zungula Plaatjies, better known as Dizu, the leader of the ensemble Amampondo, noticed Matotiyana’s musical talents and incorporated her into his ensemble.

Matotiyana brought to it uhadi (mouth bow), isitolotolo (jaw harp) and her beautiful voice and aura. Now a full-time musician, she has played around the world and still works with Plaatjies. Her album was recorded by David Langemann at the University of Cape Town in the music department’s Chisholm Recital Room, in conjunction with the South African College of Music. It was the first album to be launched by the African Open Institute for Music, Research and Innovation, an autonomous, interdisciplinary institute in the arts and social sciences faculty at Stellenbosch University.

Singer-songwriter Rehilwe Mooketsi is recording a second Matotiyana album under the new recording label Phunya, one of the institute’s many projects. The institute encourages experimentation, openness and inquiry, but it also places emphasis on archiving, for which purpose it created the Documentation Centre for Music, aka Domus.

Stephanus Muller, who heads up Domus, said the herri website “allows us to open up music research and the disciplines associated with institutional music teaching (performance, composition, historiography, theory, analysis, musicology, ethnomusicology), showing how the institute is open to all aspects of music and research.

“The institute is a laboratory for scholars and artists to pursue experimental work that seeks to give new meaning to what is conventionally understood as ‘research’ … herri is a kind of display window for how we see this happening in practice.”