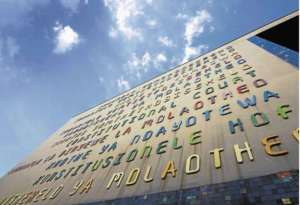 The Constitutional Court on Wednesday declared that a Bachelor of Laws (LLB) graduate from the Independent Institute of Education (IIE) in Johannesburg is eligible for admission and enrolment as a legal practitioner.

However, the court refused to confirm an order made by the high court in Pietermaritzburg in February that section 26(1)(a) of the Legal Practice Act was constitutionally invalid.

The high court had ruled that the section was invalid because it allowed only LLB graduates from public universities to enter the profession and excluded students from private institutions from doing so.

The high court passed its judgment following a challenge to the section by the IIE.

The challenge last year followed an inquiry by a parent of the IIE’s Varsity College student to the KwaZulu-Natal Law Society on whether the private college’s LLB programme was recognised by the society.

The society’s response was that only graduates from “universities” could be permitted to become candidate attorneys and therefore the IIE’s qualification would not be recognised for this purpose.

The IIE approached the Constitutional Court for confirmation of the declaration of the high court order.

In its judgment, the Constitutional Court refused to confirm the order that the section was unconstitutional. It reasoned that it was the law society’s mistaken view that an accredited LLB degree from a registered private educational institution in which students studied for degrees was not a “university” for purposes of section 26(1)(a) of the act.

In a majority judgment, chief justice Mogoeng Mogoeng said the Legal Practice Act existed to facilitate entry into the legal profession by all who had acquired a four-year LLB degree of a standard acceptable to the South African Qualifications Authority (SAQA).

“It bears repetition that in accrediting the institute’s LLB degree, the South African Qualifications Authority said that the degree would equip the graduates ‘for the professional practice of law’ and enable them ‘to apply for admission as legal practitioners’,” he said.

Mogoeng said the IIE was an “independent educational institution” as envisaged by the constitution, and accreditation by the state of its LLB programme confirmed that it was not inferior to that of a public university.

He said the IIE increased the pool from which higher education of an appropriate standard could be made accessible to many.

“All these considerations point to no other conclusion but that a registered independent higher institution of learning, like the institute, whose character and programmes meet the constitutional and statutory requirements of an equivalent public institution, is a university. To conclude otherwise would be putting form over substance,” said Mogoeng.

Another judgment, written by justice Leona Theron, concurred with the first judgment.