Only four in ten people of working age have a job, with the situation only expected to worsen within the coming years, according to a new report by Statistics South Africa and the Institute for Race Relations.

These figures are especially low when compared to many similar economies, while the figure is lowest for black South Africans, who demonstrate a labour market absorption rate of just 40.4%.

According to the IRR, South Africa’s absorption rate – the proportion of people of working age who are employed – depends largely on a person’s level of education.

Despite the country’s economy is in a slump, and tertiary institutions having a somewhat tarnished public standing due to protests and unrest, having a tertiary education is still a clear differentiator in South Africa’s job market.

What you earn a Bachelor’s degree

In January, Statistics South Africa and Analytico revealed what the average the South African can expect to earn based on their level of education.

The data showed that there is a clear graduation in monthly salary in line with the rising level of education.

The salaries listed below are based on earnings data from Analytico, covering a total sample size of 717,364 individuals with educational outcomes of Grade 8 to Bachelors level. It was based on median gross income per month in October 2016.

How SA compares to the rest of the world

While having a Bachelor’s degree or further postgraduate degree is likely to make you the most money in South Africa, the country still compares relatively poorly when looking at what international graduates earn in countries such as the United States, Australia and Germany, and indeed Bric countries.

According to a 23 August report by Consultancy.uk, despite a slight rise in average graduate salaries, at £26,268, the UK has dropped out of the ranking’s top five nations for best paid university graduates, from fifth-place in 2016.

The US and Germany meanwhile topped the rankings at $49,785 and $49,635 per year respectively. Australia, the Netherlands and France also out-performed the UK, with Russia hosting the lowest wages for graduates among the 15 nations surveyed. 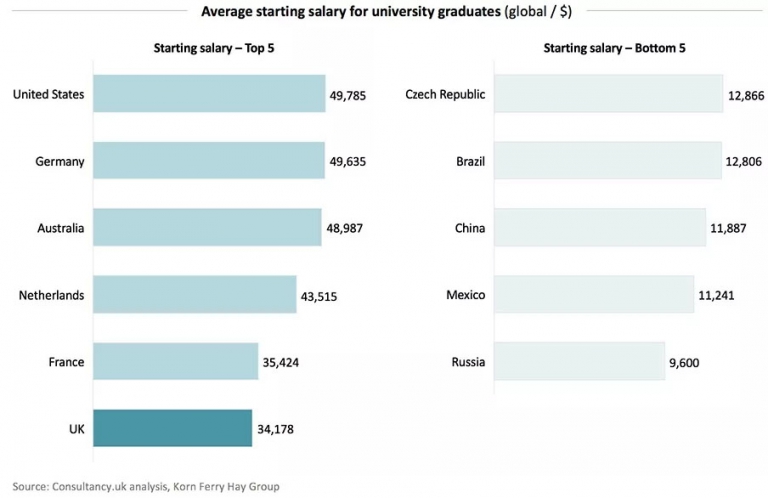