Honoured after being laughed at by UCT staff 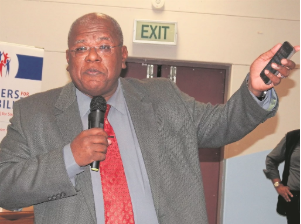 Former Vice Chancellor of the University of the Free State Professor Jonathan Jansen has warned graduating students that the “ideal of the university is under threat”.

“I would be remiss on this grand occasion if I did not warn you that in South Africa today, that ideal of the university is under threat,” he told students during the University of Cape Town’s graduation ceremony on Friday.

Jansen was speaking at the third ceremony of the last graduation season of 2019 for the faculty of humanities, which took place in the newly named Sarah Baartman Hall, and saw close to 400 graduates capped. 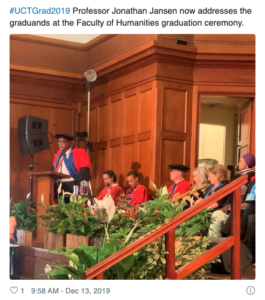 Jansen further cautioned that when you refuse to meet with and engage your academic colleagues “because they hold different views from you”, or are “critical of your work”, then you diminish the very idea of a university. 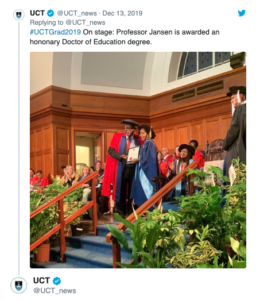 ‘A space in which ideas matter’

“Make no mistake, when you stand up for the idea of a university as a democratic space in which ideas matter and not the force of numbers or the membership of race or the allure of money or the blessing of government, you will be ostracised and you will be marginalized,” he said.

This is what sets a university apart for the former VC of UFS, as one’s membership does not depend on shared beliefs.

“What is this thing we call a university?

“You see a university, in essence, is a place where reason triumphs over rage. It’s a place where our common humanity matters more than our racial nicknames. It is the one place where anybody and everybody can speak without the fear of being shut up,” he explained.

The idea of a university, however, was to also produce leaders who stand for something and who are prepared to stand alone, he said.

“The University of Cape Town, with its stellar reputation, can only soar when it could be said of every graduate that, through your leadership and public duty, you remain, in the words of Cornel West, ‘unbought, unbound, unafraid and un-intimidated to tell the truth’.”

While he acknowledged that the institution still struggled with its colonial legacy in the post-apartheid years, small steps towards social transformation had been made.

‘I am honoured, I am grateful’

“Small steps, perhaps, but today the Senate Chambers is called the Archie Mafeje Room, this graduation hall is named after Sara Baartman and Cecil John Rhodes is nowhere to be seen. For this, the campus and the country owes the activist community of UCT a debt of gratitude,” he added

Jansen told the room full of students that UCT, being the closest university to his home, had led him as an 18-year-old to start his studies four decades ago.

Little did he know that he would return decades later to be honoured.

“The two ladies in ‘admin’ looked at my matric certificate and laughed quietly among themselves. I went home with a heavy heart. Today, four decades later, you invite me to the same place for an honorary doctorate.

“I am honoured, I am grateful and I thank you all,” he said.