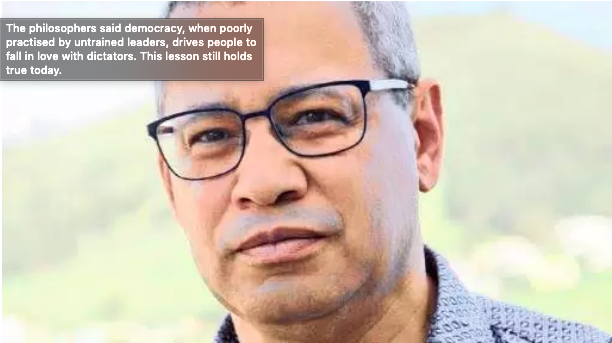 The point the philosophers made was that democracy, when poorly practised by untrained leaders, drives people to fall in love with dictators. This lesson still holds true today.

While flirting with Plato’s Republic this week, three events caught my attention. The first was the cancellation of the school transport system for some learners in Beaufort West. One fact stands out starkly: the children have to walk 3km to school, including crossing the dangerous N1 national road. Given our statistics on rape, abuse, abduction and violence, any adult who allows minor children to walk 3km every day without a robust security system in place is placing those children’s lives at risk.

Who are the experienced and educated leaders who made this risk assessment about the children of Beaufort West? Would they make it about their own children?

The other event was a project launched by global peace strategist, Professor Brian Williams, supported by Community Chest.

It brings together learners who live in communities who have had traumatising exposure to violence with learners from more affluent communities.

At the workshop I met learners who have been shot and mugged, and face daily violence, yet all have committed to become peace ambassadors and are writing up their stories about moving from acts of violence to practising peace.

Their courage moved me. I had a sense of renewed optimism that perhaps the country of our dreams is still possible.

My reflective journey ended at the memorial service for the late Professor Ben Turok on Saturday in Salt River. Both as an activist and as an MP, Professor. Turok’s strong convictions and independent thinking led him often to stand alone on principle with his convictions.

He stood for media freedom and socio-economic justice. He bravely bore the cost of stepping out of “party-line instructions” because of his convictions of what justice should do for ordinary people. Such courage is rare in the stifling sycophantic culture of our politics. His death invites us all to rediscover our values, principles and convictions.

At Professor Williams’ Writers for Peace Workshop I was exposed to the peoples’ anthem from Les Misérables: which starts: “Do you hear the people sing? Singing the songs of angry men? It is the music of the people, who will not be slaves again. When the beating of your heart, echoes the beating of the drums, there is a life about to start.”

Socrates was right. A few inexperienced, poorly trained unthinking sycophants can destroy democracy for millions of people and drive them with rage into the arms of willing dictators.

The children of Beaufort West, Professor Williams’ 30 Peace Ambassadors and Professor Turok’s life remind us that democracy is too valuable to entrust to unskilled and inexperienced individuals who live without a well-trained conviction about democracy and social justice.